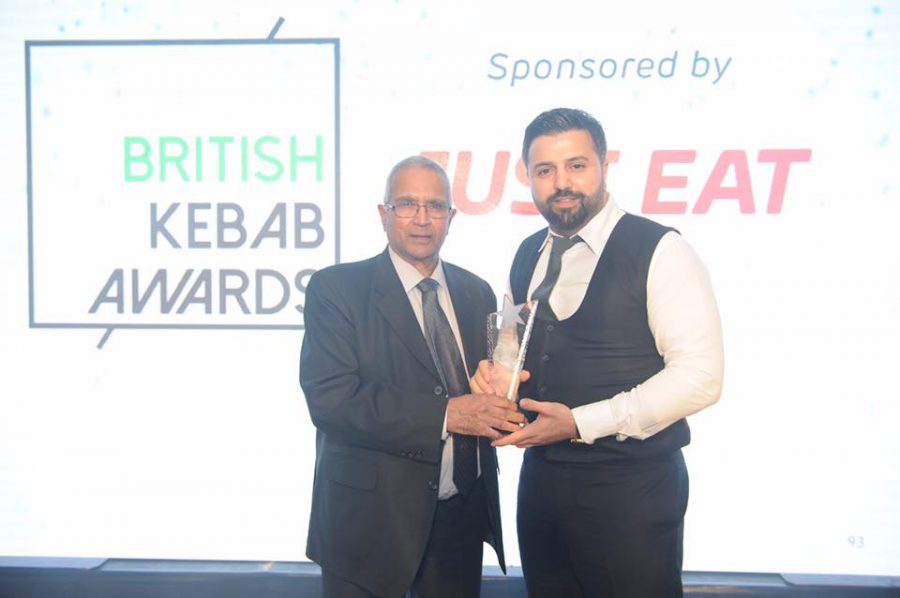 This article was first published on the Telegraph on 13 March 2018.

Kicking off the night with an emotional speech, awards founder Ibrahim Dogus highlighted the contribution of Turkish, Kurdish and Cypriot immigration, and kebab shops in particular, to British culture and the economy. He told a packed room: “In an otherwise darkened street, the kebab shop is the light that never goes out.”

But the question on everyone’s lips was – who would be crowned king of the koftes, the sheikh of shish, the doyen of the doner and the master of the mangal? The coveted prize – Chef of the Year – went to Mazlum Demir of Skewd Kitchen in Barnet, North London, for the second year running.

Skewd Kitchen is revered in London for its ‘Anatolian with attitude’ credo, offering modern twists on the classic Turkish kebab restaurant, and for the quality of its produce. Skewd beat 153 outlets for the main prize at the event attended by over 1,200 guests.

“It’s a great feeling, for all the hard work and effort to be recognised” said a delighted Demir. “The biggest joy is to be able to further refine what we’re doing, pushing boundaries. There’s so much potential in this cuisine.” After a difficult first few years – “there’s a template to abide by with kebab restaurants” – Demir stuck to his guns and is now enticing customers with his take on Turkish dining. The British Kebab Awards, he says, played a huge role. “It’s amazing. It’s getting better and better each year. Ibrahim does a really good job and has lifted our food into British culture, bringing it to the spotlight.”

“Demir is a young chef emerging as one of the best in the industry,” Dogus told The Telegraph. “He’s an example to others, to modernise, to use fine British ingredients to make great Turkish food. All the winners make amazing food, but Skewd in particular has changed the game in terms of presentation. I’m sure they’ll have a huge influence in raising the bar.”

The British Kebab Awards have become a major feature in Britain’s foodie calendar since their inception in 2013, and Dogus is delighted with the current kebab scene. “Some of the kebabs being produced in the top flight are incredible. The cuisine is coming of age in Britain with interesting twists and, at its heart, good ingredients cooked well.”

Dogus, who moved to Britain from Turkey in 1991 with his parents and ran for parliament in 2017, founded the awards for two reasons. Firstly, he thought the kebab industry, with its reputation for pallid grey doner kebabs consumed at ungodly hours, wasn’t getting the recognition it deserved.  “The kebab industry is much bigger than the doner kebab on its own”, he continued. “We wanted to change the image, the perception. It’s actually one of the healthiest foods you can find on the high street. It’s basically meat and vegetables cooked over a flame.”

Dogus has worked in kebab restaurants since he was 14, and believes many chefs and owners were previously underappreciated and demoralised. “People like my father didn’t feel very happy leaving for work. There was no appreciation, no celebration of the industry.”

For Dogus, the awards, and the fanfare that now goes with them, has helped improve morale, raise standards, and modernise the cuisine. “You won’t believe the number of calls I get now from people saying how proud they are to work in the industry.”

His second motivation was to highlight the contribution kebab outlets make to the British economy. Every day 1.3 million kebabs are sold in the UK, with over 20,000 restaurants and shops pumping over £2 billion into the economy per year. “Their contribution to British life and economy was not recognised,” Dogus adds.

Perhaps for this reason, the ceremony has become a proxy battle between Labour and the Tories. Last night’s event was teeming with politicians of all creeds, and the brochure’s front pages featured warm messages from Prime Minister Theresa May and Labour leader Jeremy Corbyn, who attended the event in 2016.

“The kebab industry is thriving,” wrote May, “and its popularity is owed in no small part to the talented restaurateurs and chefs.” Not to be outdone, Corbyn, a famous veggie, chimed in: “The British kebab industry is continuing to grow each year, creating jobs and playing a vital role in our communities in every corner of the country.”  A key factor in the industry’s rise (in the 1990s Dogus says kebab shops were largely confined to London), is the entrepreneurial spirit of Britain’s migrant communities.

Around 80pc of kebab shops are owned by Kurds, with most others run by Cypriots, Greeks and Turks. After the big textiles factories in which many worked closed down in the 1990s, Dogus says some turned to what they knew and loved: hearty, tasty, homely food.

The vast majority are still family-run – indeed, most prizes last night were collected by nuclear or extended families. “This country loves small businesses, they’re the backbone of our economy. That’s why politicians and the media show such an interest in the awards.”  Dogus sees a happy future for kebabs, with their influence spreading far beyond the traditional communities. “So many young British and Irish men and women are starting up kebab restaurants. It’s not one community anymore. We’re modernising, attracting new people. Before the awards there weren’t many non-Turkish or Kurdish people, but it’s growing, which is great. Everyone brings something new, everyone learns from each other.”

There were over 5,000 nominations this year (representing almost a quarter of kebab outlets), making judging a mammoth task. On the panel were former Conservative Chairwomen Baroness Warsi, Children and Families Minister Nadhim Zahawi, and Shadow Economic Secretary Jonathan Reynolds.