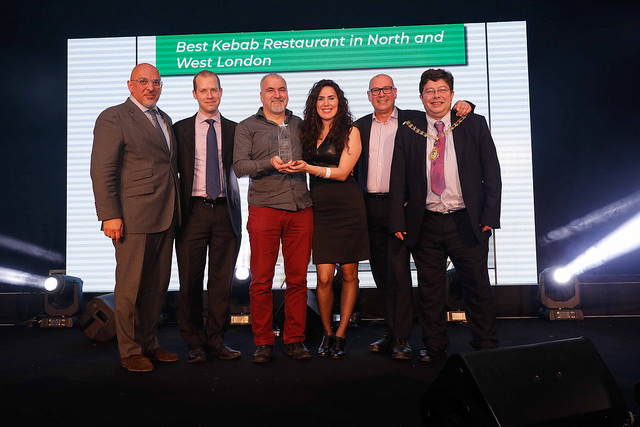 Two of the kebab world’s kofte kings cemented their place at the summit of the industry last night as they did the double at the British Kebab Awards.

Mazlum Demir, who famously produces black pide bread with squid ink and octopus in kebab form, won Chef of the Year for the second year in a row for his work at the mangal at Skewd Kitchen in Barnet, North London.

Meanwhile Resul Atalay and his twin sons, Jason and Josh, held on to the Best Kebab Van title for Atalay’s Kebab Van in Thame, Oxon. It means a 100% win rate for the family business – the Best Kebab Van award is only in its second year. Resul is famous for making his own doner from scratch and his homemade chilli sauce has no less than 30 ingredients.

Interest has been so high over the last six years that the British Kebab Awards organisers will be launching the first National Kebab Week in 2019, set for February 11-17.

This year members of the public nominated 5,012 of their favourite kebab shops. These were whittled down to a shortlist of 153 based on the number of public votes received with bonus points for nominations from MPs and councillors.

Hygiene, online satisfaction ratings and the number of #BritishKebabAwards tweets of support that a contender got were also taken into account.

Chef of the year 2018, Demir, saw off stiff competition from two other talented chefs. He was shortlisted against Besnik Hajdari, of Javits Takeaway in Edinburgh, who won Best Kebab in Scotland in 2015 and Haci Akdogan, of Haz Restaurant in London’s Square Mile, who triumphed in the Best Chef category in 2015.

Over 1,200 guests including more than 100 MPs and Lords attended the British Kebab Awards VIP-studded ceremony at the Park Plaza Westminster Bridge Hotel in central London.

Winners were presented their awards by distinguished figures from across the worlds of politics media and business, including Frances O’Grady, General Secretary of the Trade Union Council; Lord Bilimoria, founder of Cobra Beer; and Jim Pickard, Chief Political Correspondent for the Financial Times.

They were joined by media personalities such as the BBC’s John Pienaar and Sky New’s Faisal Islam, and journalists from the News Statesman, the Spectator, the Wall Street Journal, the Telegraph, the Times, the Sun and the Mirror.

The founder of the awards, Ibrahim Dogus, is a serial entrepreneur. The restaurateur owns the popular Troia kebab restaurant, a venue close to Parliament popular with MPs. He also founded the Centre for Turkey Studies (CEFTUS), which is a non-profit organisation working to build bridges between Turkey and the UK, and between Turkish, Kurdish and Cypriot communities.

British Kebab Awards founder, Ibrahim Dogus, said: “The kebab is on the march to be Britain’s national dish and the excitement around this event grows every year.

“Some of the kebabs being produced in the top flight are incredible. This cuisine is coming of age in Britain with interesting twists and, at its heart, good ingredients cooked well.

“British foodies are showing their appreciation for this ancient style of cooking and competition is getting extremely hot. For two of the finalists to retain their titles two years in a row is no mean feat and I know their competitors will be even more determined to unseat them next year.”

Graham Corfield, UK Managing Director of awards sponsor Just Eat, said: “I would like to congratulate all of the nominees and winners at the British Kebab Awards 2018.  These small, independent businesses make a significant contribution to the economy and offer fantastic food and service to their local community.  With thousands of kebab restaurants on the Just Eat platform, it’s right we champion the hard work, passion and drive demonstrated by restaurant owners and their staff in making this a thriving industry.” ​

The annual event is the only one to recognise the contribution made by the kebab industry to the British economy – worth more than £2.8billion a year, supporting around 200,000 jobs across restaurants, suppliers and the food industry.  This year’s awards raised money for the bone and soft tissue cancer charity Sarcoma UK.

Every day, more than 1.3m kebabs are sold across Britain. The UK’s first kebab shop, Istanbul Restaurant in Soho, opened during the Second World War and pictures of it feature in the Imperial War Museum.

However it was not until 1966 that the famous doner kebab – cooked on a vertical spit – first appeared with the opening of the Hodja Nasreddin Kebab House by Çetin Bukey and Kojay Hüseyin in in North London’s Newington Green.